(A88-99; A89-16)
This Record Sub-Group is a collection of memorabilia relating to brothers Adam and Curtis Hill, who played football for the University of Missouri-Columbia during the 1890s, as well as Adam Hill's daughter, who attended Stephens College in Columbia, Missouri, and granddaughter, Nancy Mills Ehrlich, who was a student at the University of Missouri from 1956 to 1960.

Among these items in the Sub-Group are photographs of UMC football teams, ca. 1890-1897, views of Francis Quadrangle, Jesse Hall, Memorial Tower construction, general campus views, freshmen hazing and paddle lines, University of Missouri Volunteer Infantry in preparation for service in the Spanish-American War, ca. 1898, and student camping excursions and vacations.

Additionally, this Record Sub-Group contains a scrapbook of photographs collected by Warren Glen Fowler while he was a student at William Jewell College, ca. 1915, and the University of Missouri-Columbia, ca. 1916-1920. The bulk of Fowler's material pertains to UMC student activities, such as Engineering student's St. Patrick's Day celebrations, football games, and dances.

Also included in the Sub-Group are images of the Hazing of Freshmen, and the University of Missouri during WWI. Cards and pamphlets handed out by candidates for MU student body offices, MU sophomore class hazing posters (their rules for freshmen), Engineering-St. Patrick's Day posters, poems, news clips, post cards, dance programs are also included in the Sub-Group. Photographs included in the collections consist of images of the Fowler family, their farm, sawmill, tractors, mules, and their vacation trips.

This Record Sub-Group is divided into two record series. Series One holds the memorabilia collected by Adam and Curtis Hill, and by Adam Hill's daughter and granddaughter. Series Two is made up of materials collected by Warren Glen Fowler. 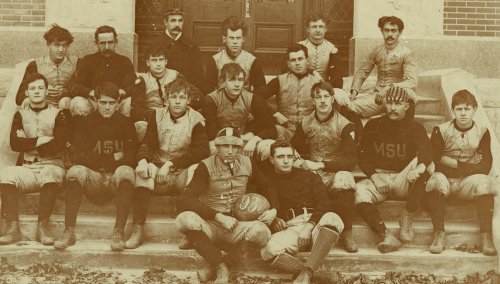 FF 4
Certificates and Awards, including: Membership in "University of Missouri Union and Stadium," given for donation to building fund, ca. 1926; "Varsity M" award, for participation in intercollegiate athletics; "Life Pass" #224, certifying Adam Hall won a letter in varsity competition and giving him a lifetime pass to all athletic contests held on the University of Missouri-Columbia campus; A program for the Agriculture Club Awards Banquet, ca. 1934.

Env 5
University yearbook - M.S.U. Index, ca. 1891. Published by the Missouri State University (MU) Athletic Association, this was the first MU yearbook, precursor to Savitar. Curtis Hill was a member of the Editorial Staff.

FF 9
MU Football's "Run Away" Team, ca. 1896. Includes correspondence and newspaper articles relating to the MU football team that "ran away" to Mexico with the University of Texas "Longhorns" football team. This was an unauthorized trip by the teams that ended with the MU coach being fired and players suspended. During this trip, the Tigers and Longhorns played the first football game ever held in Mexico, on Christmas day, 1896.

Also within this scrapbook are photos and other items such as: Views of student rooms at William Jewell College; Images of freshman hazing, printed 1915-1916 sports admission ticket; scenes along the Missouri River below Kansas City; MU football crowds, players, and game action; views of Francis Quad from Jesse Dome; image of how "The civil engineers administer justice" (running a paddle line in front of Jesse Hall)

Other photographs and items are: Fowler working on State Highway Department crew; cards and small pamphlets handed out by candidates for student body offices; a poster with the message, "WARNING! HELL FIRE WARNING! DANGER! NOTICE -- Class of 1922 -- BEWARE..."; a photo of a poster with the message: "WARNING! WARNING! BEWARE!...1919 MUTTONHEADS..."; sophomore's rules for freshmen; Fowler's "Student Card" and transcript of grades ("...The student must preserve this card and present it when requested by any teacher or other official of the University..."); Tau Beta Pi Alpha of Missouri materials (such as: "blueprint" initiation banquet programs and Tau Beta Pi Gamma of Pennsylvania initiation banquet programs.

Fowler's scrapbook contains: a notification of appointment as Gregory Senior Scholar, October 31, 1918; a copy of a letter from J.M. Sills to F.P Spalding regarding Fowler's summer work, ca. 1919; newspaper clippings concerning MU during WWI; "The Honor Roll" - names and cause of death in "the Great War"; "The Awful Engineers" song (Twelfth Division of Light Railway Engineers) and "Coast Artillery Marching Song"; photos and newspaper articles relating to Fowler's work during WWI (draining Arkansas swamps), including: camps, equipment, crews, and a dredge boat.