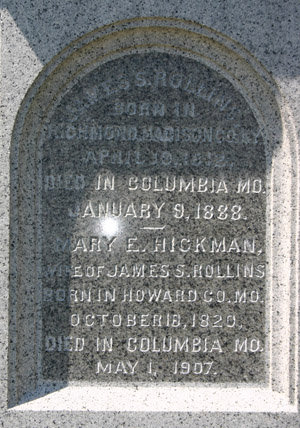 Detail of inscription on grave monument. 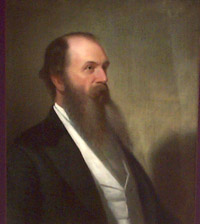 James Sidney Rollins was one of the earliest and strongest supporters of the University of Missouri. The Geyer Act of 1839 had made provisions for funding a state university and in that same year, Rollins, a newly elected state legislator, drafted a bill to establish the location for a state university. Six centrally located counties in Missouri were under consideration as the location for the institution. Rollins was selected to represent Boone County, since he had done so much to help the county raise money for this bid process. With the help of Rollins, Boone County was successful in raising the most money earning Columbia the privilege of becoming the home of Missouri's state university.

During the Civil War Rollins worked as a lawyer and congressman supporting President Lincoln and his goals for the country, including the Morrill Land Grant Act, which passed in 1862. One often told story is of a trip through Missouri, during which the coach carrying Rollins was stopped by Confederate guerrillas and his identification was demanded. Knowing the attitudes towards Lincoln sympathizers in Missouri, Rollins posed as a preacher and escaped an ill fate.

After the Civil War, Rollins returned to the University of Missouri, becoming President of the Board of Curators in 1869. During Rollins' time as board president, he introduced a bill which established the Normal Department and also worked to raise money for building the president's residence. After the Morrill Act passed, Rollins faced strong opposition, but was eventually successful in persuading legislators to make the University Missouri's federal land grant institution. In 1886, almost fifty years after leading the effort to create the University, Rollins resigned from the Board of Curators. The University dedicated Rollins Commons, to honor the man known as the "Father of the University of Missouri."